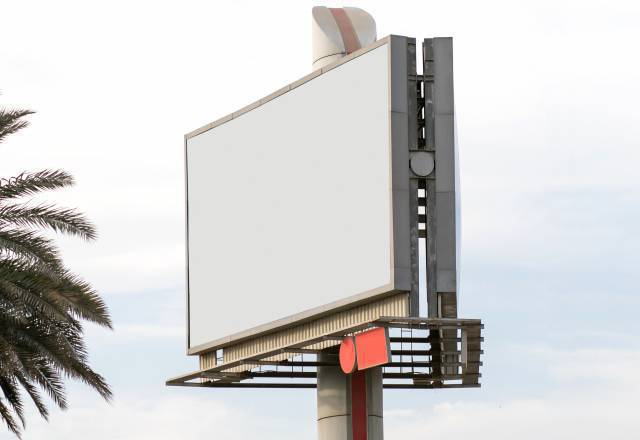 In case you're wondering: No, I didn't come up with this brilliant phrase, and it's unclear exactly who it belongs to. But, it's a phrase that summarizes my thoughts on tendencies in the industry...

Maybe this article should have been titled: Thoughts on the Billboard Effect.

Oh, the Billboard Effect. In 2009, Cornell University published a study coining the term, and it's been a central topic of discussion ever since.

Wait, but what exactly is the Billboard Effect?

In a few words: The Cornell study in 2009 found that by listing on Expedia, a certain hotel chain saw between a 7.5% to 26% lift in reservations vs when they weren't listed on Expedia. Across all their channels, including direct reservations.

The argument is that travelers see your property in more places (like real-life billboards), and that increases the total number of bookings across all your channels.

It's now interpreted to mean: The more OTAs you list on, the more total reservations you'll get.

The Billboard Effect's effect on the Industry

So, even if you haven't heard directly of the Billboard Effect, you've probably been witness to its influence on the industry over the last decade.

The explosion of new OTAs.

The contagious recommendations from one hostel owner to another: Need more reservations? No problem! Just list your hostel on more channels!

It's such an easy fix to a complex problem.

It's easy to see how the Billboard Effect has gotten into hostel manager DNA. It's pushed every hostel manager to list their hostel on as many channels as possible.

And with the explosion of OTAs, came the rise of Channel Managers. Listing on more channels has become so important, that hostel owners seek out Channel Managers with the largest number of connected OTAs. The thinking is that by listing on 150 channels (I haven't seen this yet!), they'll get more reservations. They will be on their way to reservation heaven in no time.

Not so fast there cowboy.

The problem is that simple solutions to complex problems don't exist.

You see, like with most things: Quality & Relevance is more important than Quantity.

Going back to the billboard analogy: The reality is that billboards work when people see them, right? And today, people see these billboards on Google's search results, right? Think about it like this: When someone searches "hostels in [your city]", they browse the first few links. After your hostel has come up consistently as one of the top choices, bingo - that's the one they book.

The key here is the first few links. Who actually gets to the second page of results on Google? Nobody.

Remember: "The Best Place to Hide a Dead Body is Page Two of Google".

That applies to your listing (or billboards?) on your OTAs as well.

With today's hyper-competitive world of appearing on Google's first page (especially in travel!), new OTAs can't compete against the monster OTAs in main search volume. They are limited to smaller niches in search. If you're in those niches (like beach hostels for surfing), then some OTAs may make sense for you. But generally, that means that when you list your hostel on that new OTA, when someone searches for "hostels in [your city]", that listing is going to appear on page 50. And nobody is going to see it. Nobody.

So, when you sign up to a channel manager and list on 15 OTAs just because they are available on your channel manager, you've done a few harmful things to your business:

By now, you should be able to tell if you're already listed on some OTAs like this. The biggest clue is that you've been doing everything right (good photos, high property score, competitive pricing, etc.) and have received 1 or 2 reservations in the last 6 months.

Let's face it: You won't get more reservations necessarily if you list your hostel on more channels. The Billboard Effect, in this regard, is dead.

The thing is that the Billboard Effect may actually be useful if we focus on the first page of Google results. After all, that is the metaphorical highway where billboards appear.

Now, that doesn't mean just OTAs! It's more and more common for Facebook pages and Instagram accounts to appear in the top results. These social networks can rank extremely well on Google due to their domain authority (an SEO thing, but basically it means that because facebook.com/ is really important, it also brings up the search ranking of all its internal pages as well, like your Facebook Page).

Not all OTAs are created equal

As more and more new OTAs emerge, it's increasingly important to understand whether to list on them or not. The market is always in flux and you need to be able to adapt.

Try them out and if they don't work, get rid of them and close your account with them.

An example to drive this point home: At BananaDesk, since the beginning, we connected to hundreds of channels via our Myallocator integration. A few years ago, we noticed that a little over 90% of channel reservations came from only two OTAs. Only two OTAs! The remaining 10% was split between a few more OTAs. So, what did we do? We went ahead and connected to those two important channels, and are working on making those connections even more powerful.

It's not exactly the same for every region, country or hostel, but it's shockingly consistent.

Focus on your Direct Booking Strategy

Instead of only investing time and effort into listing and maintaining more and more OTAs, invest that same time and effort into your direct strategy. That doesn't mean just having a Booking Engine available on your website. A direct strategy is not a "set it and forget it" kind of thing. Investing in your direct booking strategy means continuously working on new initiatives to bring visitors to your site and converting them to guests. This topic is huge and merits a separate book, so I won't dive deeper than this.

I will say this though: It's worth investing in your direct booking strategy because you control it, and it's independent from OTAs' power over the industry.

New to the Hostel Industry? Follow this advice to survive

Find out what 2-3 channels (max) work in your area. Get listed on them and make sure you have an incredible profile. Make sure you have competitive pricing. Build your website (with a Booking Engine of course), then create a Google Place, a Facebook page, and an Instagram account. Start reading into and thinking about different ways of improving your direct bookings.

Stop listing your hostel on as many OTAs as you can. It doesn't solve your reservation problem. There are only a small handful of OTAs that will move the needle for your business. List your hostel on the OTAs that actually sell, and then focus all your energy on your direct booking strategy.

Photo by Kate Trysh on Unsplash.